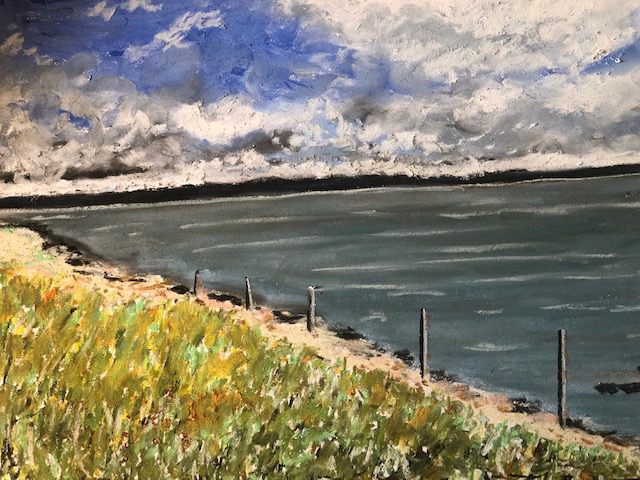 The pictures here reflect the intermittent patchy time I have been able to devote to painting.
Early in the Year, I was producing pictures for the third story in the
Adam & Evelyn trilogy

Then there came a lot of introspection as my studio Greenhouse was destroyed.
The trees also clipped another building so the project expanded exponentially….here are some photos of where we are now with that second building.

There was then a trip to the Lake District and especially the coast between Ulverston and Ravenglass.
You will see the worn wooden posts that face the sea.

KEFALONIA…I went with Ross and this was the view from the cottage across the channel between Ithaca and the main island. I love the light in this area.

Re-visiting the Lake District this Xmas I sketched the woods near High dam in Finsthwaite.

Falling back to Ravenglass I did this picture of the sands as it butted up to the sea.

I am busily finishing
THE LIGHT AT THE END OF THE WORLD’ which is the third story of Adam & Evelyn.

I have to say that many of the pictures were now completed over a year ago and the finishing text is taking some time. We hope that it will all meet and gell together.

NEW STORY ideas…having laboured long on the text for this third story I think that the next written words will be shorter story’s which require maybe one picture.