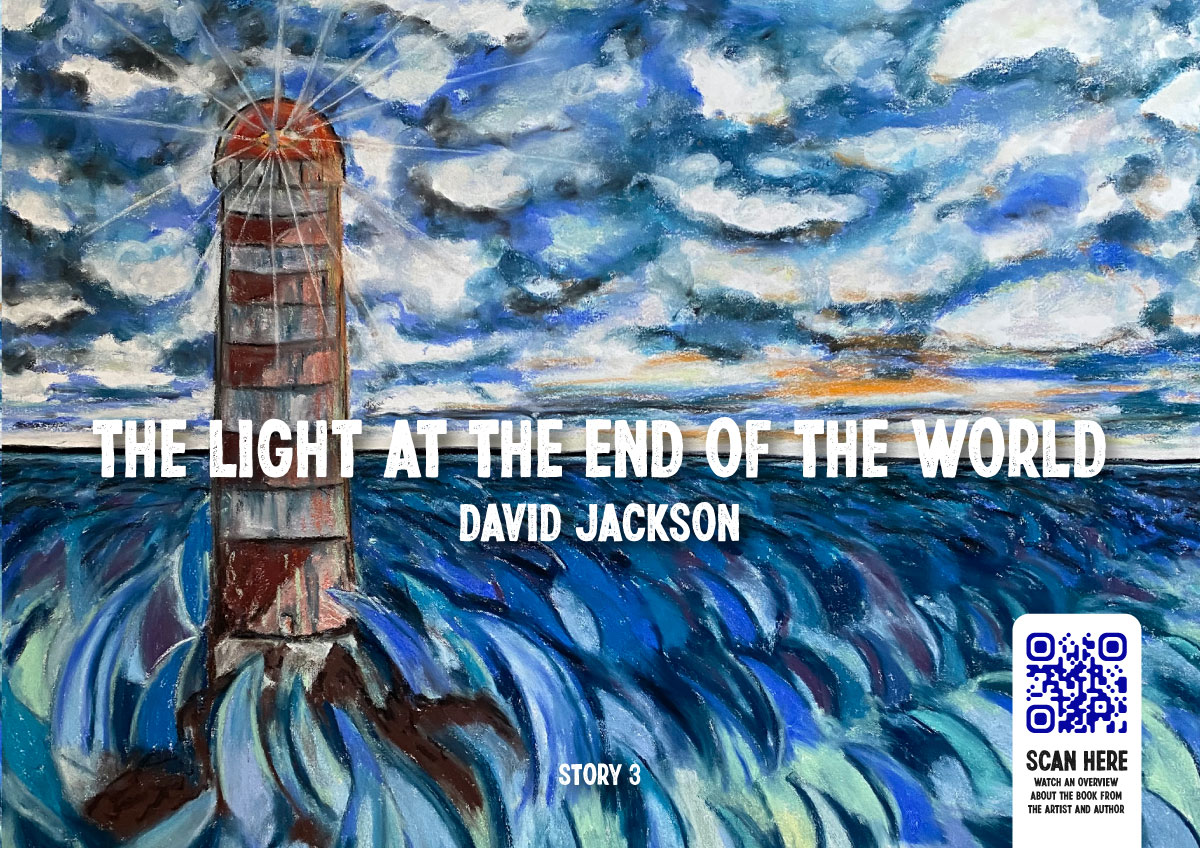 I am working on the pictures for the second and third stories of the ‘Island of lost souls’ and the ‘The light at the end of the world’.

The way I work means that the pictures create the story as much as the text driving an attendant picture. The creativity moves on two fronts. The pictures often pathfinding the text.

It is a rather unique way of conceiving art, more akin to movie making I presume. I know that directors ‘storyboard’ a script. They sometimes allow the actors to change the script.

Anyhow, I digress. What is important is that creativity is flowing and seeping on to canvas and into the written blurb.

I also have an editor in the shape of Roderick Chaytor Innes who has worked in an editorial capacity for thirty-five years. He is asking me many questions as my mind explodes on to the paper.

You will see the cover of story 2 (The Island of lost souls). It is a prototype but pleasing to the eye I feel.

Also featured here is a picture of the lighthouse at the end of the world. It is perched on the edge of a waterfall. Let’s face it putting a lighthouse in some perilous stormy sea has been with Turner and many artists. Now having that ocean disappear off a huge waterfall adds an absurd surrealist sort of peril. It also made me think of pre-Copernican thoughts of the world…Vikings thinking they might disappear off the edge of the earth…..flat earth thinking.

The Maelstrom picture itself is not formatted for the A4 landscape books, thereby adding some credence to the thought that it can exist independent o the story.

I have entered some work into the Ashurst Prize.

We will see if the ideas stand up to some scrutiny. I can’t think of the pictures being a ‘one-liner’. They have to prompt several questions and work on many levels.

No doubt the current COVID 19 lockdown has some poignancy with this Island theme. Don’t we in Britain tend to think of our homes as our castles? Our worlds we live in. Isn’t the energy we consume and our own life a metaphor for the planet? Don’t we reap what we sow?

There is no political comment in my stories or pictures. They are a product of the time. They are meant to be an enjoyable experience and prompt discussion. They are escapist while being encapsulated. They present counter currents and pose questions which require solutions of the protagonists.

They invite you to surf your imagination and fly.